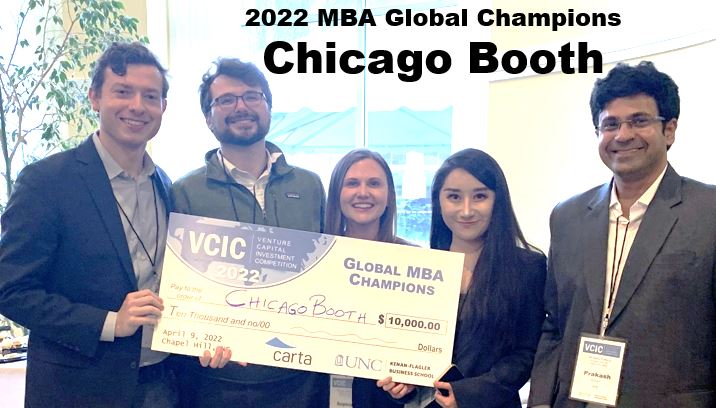 A team of Chicago Booth students won first place in this year’s Global Venture Capital Investment Competition (VCIC), a unique challenge that puts MBA candidates in the shoes of the investor for an immersive education on how funding decisions are made and agreements are reached.

The competition took place April 8-9 at the Kenan-Flager Business School at the University of North Carolina at Chapel Hill, which has hosted the event since its launch in 1998. It brought together 13 teams from top schools in commerce from around the world, each having won regional competitions to clinch a place in the global final.

Team Booth’s first-place finish marks the school’s second time winning the international competition – the first was in 2010 – despite having won regional championships and made the world final 10 times.

“The VCIC is a wonderful experiential learning opportunity for anyone interested in living in the entrepreneurial ecology,” said Scott Meadows, clinical professor of entrepreneurship at Chicago Booth and academic advisor for the VCIC. “It helps students develop the empathy needed to reach a mutually acceptable agreement between entrepreneur and investor.

“This year’s team continues a long tradition of Booth VCIC teams that have performed well at every level,” he added.

The winning team consisted of students from Booth Yumeng (Kelly) Bu, Sophia Lammers, Duncan McGillivary, Peter Pilone and Prakash Ramani. A mix of full-time, part-time and Executive MBA candidates, team members brought diverse skills in operations, venture capital, engineering and product development which they believe will were the key to their victory.

“When you brought the five of us together, we had a strength that made us successful,” said McGillivary, a first-year MBA student who previously worked in investment banking and venture capital.

Booth students must apply to be accepted into the VCIC program, which attracts those interested in pursuing careers in venture capital as well as operators and entrepreneurs seeking to understand the thinking on the other side of the table. Teams of five compete in a school-wide contest, and the winning team represents Booth in the regional finals. This year, there were 73 teams competing across 13 participating regions, with each region sending their top spot to the Global Finals.

The competition places student venture capital teams on the receiving end of a real startup fundraising pitch. They must appraise the land, determine the value of the business, do their due diligence by asking the right questions, and develop a term sheet for the investment. Finally, they must respond to a grid by a list of judges who are themselves venture capitalists.

No real investment is made in startups, although participating founders come away with good practices. According to organizers, more than 25% continue to raise venture capital after participating in the VCIC.

For students playing VC for a day, there are many useful lessons, many of which are applicable outside of the VC context.

“It’s like a pressure cooker to learn how to work as a team,” said Pilone, who worked at a games startup before starting his MBA and hopes to work in video game venture capital. “We give you a pitch deck, you have an interview with the founder at 10 a.m. and you submit a term sheet at 2 p.m.”

The members of Team Booth learned to leverage their individual strengths and were lucky in good chemistry, even though most were strangers before VCIC. They fed off each other during introductions, which honed as they rose through the ranks.

For Ramani, an Executive MBA student who works as an engineering manager at Intel, the experience was a “great confidence booster” that encouraged him to react when he felt put on the spot.

“I’ve been through some pretty awkward times, and it helps to know when to speak up and when to let your team discuss things,” said Ramani, who was also part of the winning team in last year’s Global New Venture Challenge. , digital stethoscope startup HeartScreen. He attended VCIC to build his general knowledge base, but after the win he is now seriously considering transitioning into an investor role.

Team Booth laughs at their bumpy ride to the top. In the first round of the World Finals, when the 13 finalist teams are normally narrowed down to six, the judges let seven teams advance to the next round, and Team Booth later learned they were the seventh to barely have creaked.

Given the choice to assess one of three starter pitches, the team had chosen a local Singaporean social media company and developed a ‘confusing and unique’ term sheet and did not go down well with the judges. , said McGillivary. It was also the first time they competed in person, removing the benefits of being virtual such as the ability to message your teammates.

Humbled by the poor performance, the team lowered their expectations and, with a calmer state of mind, got back on track. For the final round, they were fortunate that one of the startups they could choose to evaluate was a blockchain company, as McGillivary had previously worked at a blockchain investment fund.

Despite his previous VC experience, McGillivary found the VCIC extremely useful in getting critical feedback on condition sheets, which he hadn’t realized were so difficult to pin down. He was surprised to find that even the most successful venture capitalists had very different opinions on the important terms of the deal.

“There’s probably a right way, but a lot of it is very subjective,” McGillivary said. “It actually made me more excited about being in venture capital because there’s room to do the things you want to do.”